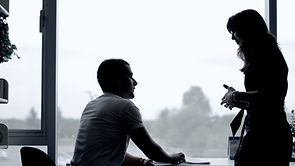 “We love to tell stories, and are driven by that desire to do it for a living.”

…As the sweat rolls down my brow with relentless fury, I eye the surrounding locale with paranoid trepidation. With my vision shifting from left to right across the vastness of this foreign land, I become aware of one thing; I am not alone out here.

Something stirs in the distance. 200 metres to my immediate right, a movement drifts towards me. The wind, feverishly increasing in velocity, rips dust across the windows of my Audi R8 with a torrid intensity. My eyes squint with ambitious hope, but the images are jagged mirages of the mind.

I insert the key into the ignition and turn. But with the sound of cliché echoing amongst the hissing rattle of desert sand pelting away outside, the engine does not turn over…

The preceding story was written as mere entertainment, but was altered to incorporate one small, seemingly unimportant fact: The endorsement of an Audi R8.

A story can exist for many different reasons. In this regard, however, it comes to exemplify a growing trend in 21st century marketing; the notion of brand marketing.

The idea is a fairly linear one: the fusion of creative storytelling with inconspicuous product placement–A concept that the St. Catharines-based Open Concept Films (OCF) has embraced since their inception in 2010.

Comprising of Jason Lupish, Adam Stephenson (co-Creative Director) and Ralph DeGroot (OCF Producer and Project Manager), the group firmly believes that the days of traditional commercial marketing are on the brink of extinction.

Says Lupish, “For all intensive purposes, corporate video, in its most traditional form, is dead. People want to be entertained. They don’t simply want to be provided with an answer, but rather desire to decipher it on their own.”

Adds Stephenson, “People identify with stories, and they identify with characters and situations. So, in essence, what we we’re doing is telling stories that have interesting and relatable characters. And then we attach a brand to these stories therefore allowing the brand to benefit from the exposure of the film. In essence, we are blending the creative with the commercial”.

Ultimately, this reads as a sincere renouncement of anything associated with the traditional modes of commercial production. Consequently, the company has become fully intent on focusing their energy and passion into the construction of 2-3 minute short films that aspire to advertise a particular product in a very nonchalant sort of way.

“The industry is still in its early stages. In fact, probably more in utero than anything,” says Lupish. “But we’re at the forefront—we’re literally writing the DNA for a new brand of what used to be called corporate video.”

Though seemingly still in a state of infancy, the company has already crafted brand films for such corporations as Halls XS and Brock University. In addition to this, they’ve also donated their time to community projects such as OneWorld Schoolhouse Foundation and the Niagara Catholic School Board.

But an important question does arise. If they’ve encountered such a vast amount of achievement over such a short period of time, why not expand to a major market along the lines of Toronto or Montreal?

The answer is a rather simple one.

“The Niagara Region is my home,” says Stephenson. “When I surround myself with the people that matter to me, I’m able to draw inspiration and feel better about the work I’m producing. I’ve spent years with this group of people and they are all as creative as I am. I don’t want to abandon that.”

Lupish readily concurs, “I’m from St. Catharines, and most of my family is situated here. “It’s not the best excuse but it’s a logical one…And realistically, what with technology being the way it currently is, I can do my job from anywhere in the world.”

It’s a telling statement about how the current technological climate of our society is influencing our methods of choice. With advancement progressing at such a staggering rate over the past 10-15 years, companies no longer fear the need to traverse to the larger cities for further employment. With potential jobs a mere click away, companies are now thriving in smaller markets.

Though the company has been profiting from their branded films (they also offer event coverage, web content production and  produce/direct music videos for local artists), it’s interesting to note that the original idea behind the formation of Open Concept Films had to do with Lupish’s and Stephenson’s other passion; feature films.

In 2010, they had just started work on a film entitled A Kind of Wonderful Thing, but needed a company name to place it under. Thus OCF was (un)officially born. Since then, the film has gone on to garner high acclaim, and in August 2012 had an official red carpet premiere at Brock University.

In October 2012, Open Concept Films continued their ascension as a relevant Niagara-based media group as they packed up and moved their headquarters to 1 St. Paul St. E.—becoming the newest tenant at nGen’s Generator at One Studio.

“This is a huge step for OCF,” says Ralph DeGroot. “All of a sudden, we have moved into the global market with projects for a Brazilian marketing firm, Espalhe, and Kraft Foods. Places like nGen are starting to help facilitate growth of the entertainment industry right here in Niagara, and we’re quite proud to be a part of that.”

But the notion of complacency has never found residency within the mindset of the creative team. Their aspirations are for continual growth, and to create content that is consumed by the masses. Whether that content be through traditional media sources (television, theatre, radio) or new media (Internet), the desire and drive continues to burn.

“We are driven by an innate creativity. Our professional drive has always stemmed from our fascination with the exploration of discovering/creating something new,” says Lupish. “Open Concept Films is, in its most basic sense, filmmakers and storytellers who are dedicated to bringing an artistic sensibility to our work.”